Ubuntu - Wayland - Excitement after all

Mark Shuttleworth recently announced that Ubuntu will do away with GNOME, The good old, desktop environment – as the default. Making Unity, (which is the current default for netbook version) THE default. The switch was barely absorbed by ubunters and is now followed by another announcement of replacing the X.org server with a newer, minimalist X server - Wayland. Wayland is still in alpha. So, for the pessimists this announcement and the switch is a little cavalier. For the optimists, this is a huge step towards a better GUI.

To put simply, Wayland is different from X.org in that it (Wayland) leverages the newer kernel's ability to do much of the work X.org's complex layers do. It natively uses 2D and 3D support from OpenGL.Technically – Quoting Wikipedia

Wayland uses existing technologies in the Linux kernel such as the Direct Rendering Manager (DRM), kernel mode-setting (KMS) and the Graphics Execution Manager (GEM) batchbuffer in order to provide a minimal display server 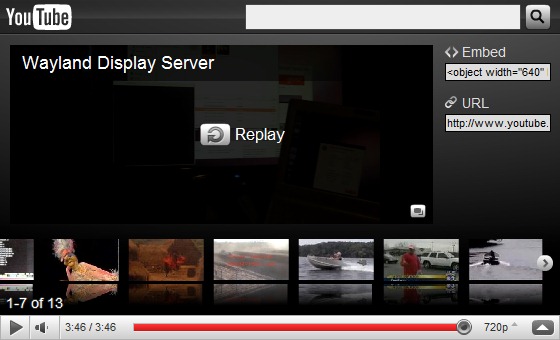 Wayland server
This might be very inviting, but with the pros, comes the issue of backward compatibility – for older hardware, older . Many current applications Linux gui programs use X.org's libraries  or worse yet X11 dependent – this would imply for the applications to work, The Ubuntu version must introduce a backport library interface to proxy the current applications. This may still be performant, but will require a hell lot of testing. The eventual over haul might be much longer. Mark suggests that it may take as much as 4 years to get everything. But with canonical's support, the most used applications may see the light of a better experience much faster.
As with everything that proposes a change, This issue will live to be on the minds of developers and users as well. X.org had a similar friction when X11 was to be replaced. But as time progresses, the future might refer this point of time, as a step forward. An excitement after all. Albeit, Canonical may not completely do away with GNOME. May be there will be, like Kubuntu and Xubuntu, Gubuntu.