March 31, 2010
Just less than 2 weeks from the news of venture with Google, Airtel and BSNL have released new Faster internet plans. 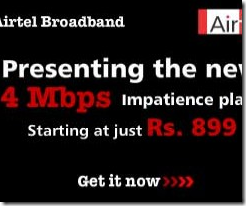 Airtel released a "Impatience" plan running 4Mbps to home users. Starting at a mere 899 INR (< $20), this could very well be an new era in the making. The catch – its released only for Bangalore, Chennai, Delhi, Gurgaon, Mumbai and Noida

BSNL also added a few new plans for faster speeds in unlimited plans. This adds a lot of choice for the regular users in other cities.

Just goes out to show the potential Indian IT infrastructure has in years to come.