Obituary to an Extrordinary Man 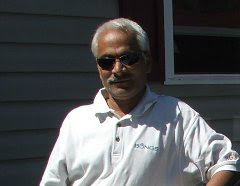 My father fought a valiant battle with Cancer. He passed away in early hours IST today (May 15, 2009). He was 51, 13 days shy of being 52. He sustained Neuro Endocrine Carcinoma of Rectum (small cell type) - A rare type of protocol-less and extremely aggressive Cancer. However, Doctors at Yashodha Cancer Institute, Hyderabad, tried their best to palliate its aggression.

He did an amazing job undergoing a very excruciating Cancer treatment. He actually was asymptomatic for a couple of months in between. But the Cancer bit him back. Second time around, He could do only so much in response to the therapy. Yet he did well till the end. Thanks to the expert advice from the primary consultants at Yashoda, We were able to manage to reduce his pain to the least possible. He passed away amongst family with considerably very little pain.

Our family appreciates Dr.Vottery, Dr.Sagar, Dr.Mohanty and Dr. Babu Krishnamurthy for their efforts and their amicable nature. Without them, My father would probably have had a much difficult time.

I thank all of my friends, relatives and well-wishers who stood by our family through the last 9 months. Not only did it give us tremendous strength, but gave my father a lot more to fight this time through.